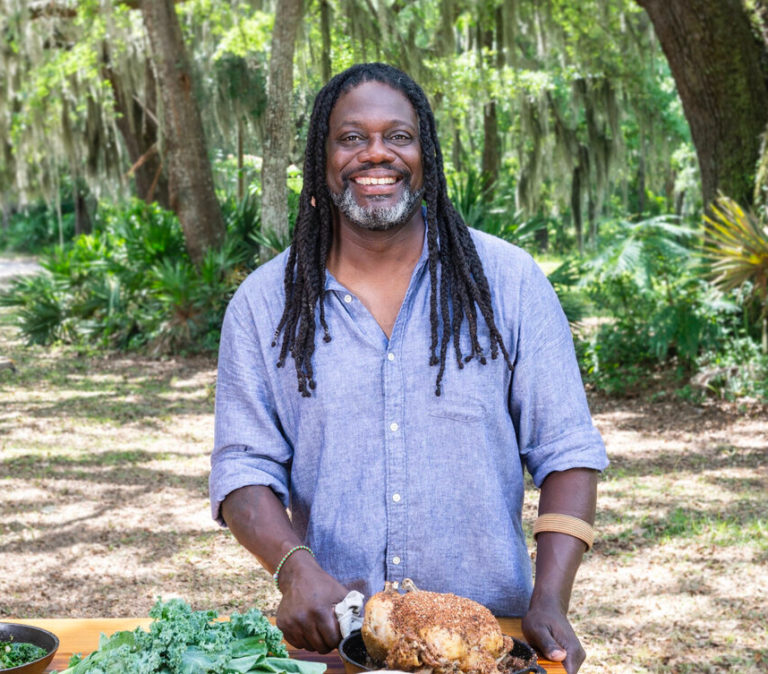 Early in 2018, Matthew Raiford was shocked when the news came down from New York that he had been named a semi-finalist in the Best Chef in the Southeast category by the esteemed James Beard Foundation. But, those who have dined on his inimitable interpretations of Coastal Georgia cuisine or experienced his ebullient personality have long known it was just a matter of time until Raiford captured the taste buds of the nation. Raiford’s roots run deep along the Gullah-Geechee corridor that spans the South Carolina Lowcountry to northern Florida. His great-great-great grandfather, a former South Carolina slave, purchased and assembled the lands that became Gilliard Farms, just west of Brunswick, Georgia, more than 150 years ago. Raiford grew up breaking the dirt and trading crookneck squash for sweet potatoes, raising hogs and chickens, and only going to the grocery store for sundries.

After a military career then graduation from the Culinary Institute of America in Hyde Park, New York, Raiford returned to the farm in 2011 to continue the traditions of his Gullah-Geechee heritage and to create an authentic farm-to-fork experience for locals. He received certification as an ecological horticulturalist from the University of California’s Santa Cruz Center for Agroecology and Sustainable Food Systems. He served until recently as the program coordinator and associate professor of culinary arts at the College of Coastal Georgia. In 2015, Raiford, the former executive chef at Little St. Simon’s Resort, and his partner, Jovan Sage, a food alchemist, opened The Farmer and the Larder on Newcastle Street, helping jumpstart the revival of Brunswick’s historic downtown. Raiford has appeared in Southern Living, Golden Isles, Paprika Southern, and Savannah magazines, and is a frequent presenter at food and wine festivals throughout the country.