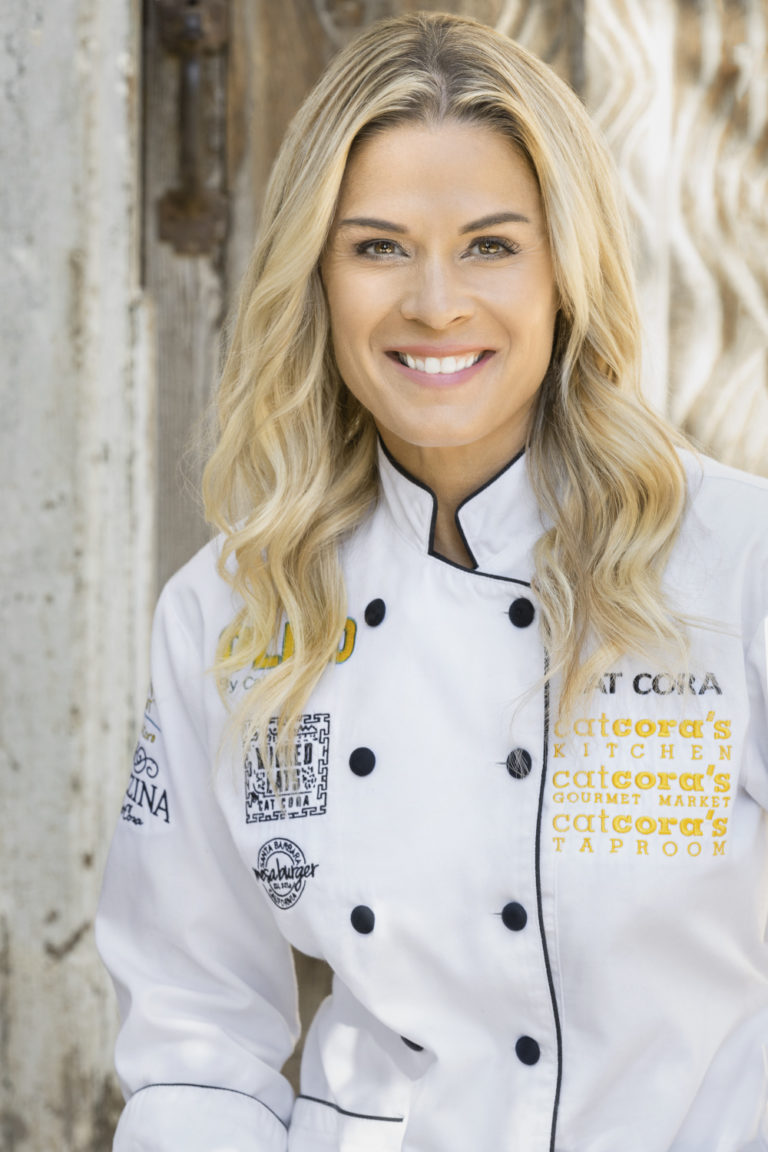 Cat Cora is a world-renowned chef, author, restaurateur, contributing editor, television host and personality, avid philanthropist, health and fitness expert, lifestyle entrepreneur and proud mother of six. The Jackson, Mississippi native, who trained at the Culinary Institute of America and went on to cook at two 3-star Michelin restaurants in France, has been captivating audiences since she made her TV debut in 1999, as co-host of Food Network’s Melting Pot with Rocco Di Spirito. She went on to host My Country My Kitchen: Greece, Date Plate, and was one of the featured hosts on Fine Living’s Simplify Your Life. Cat Cora is also a woman who holds a series of “firsts” for women in the culinary industry.

In 2005, Cat Cora made television history when she became the first-ever female Iron Chef on Food Network’s hit show: Iron Chef America. Since then, she shattered the glass ceiling as one of the first females to dominate the historically male culinary industry. After Cat’s Iron Chef debut, she was featured extensively on a number of television shows, including as co-host on BRAVO’s “Around the World in 80 Plates” as well as FOX’s “My Kitchen Rules.” and ABC’s “Family Food Fight”.

In 2006, Cat was awarded Bon Appetit Magazine’s “Teacher of the Year Award” and was named the Executive Chef of the magazine. Since then, she has blazed her own trail through the culinary world, becoming the first female inducted into The American Academy of Chefs Culinary Hall of Fame.

Cat has opened more than 18 restaurants across the United States and globally, highlighting her platform on health, wellness and sustainability:

Cat Cora’s Kitchen, and Cat Cora’s Gourmet Market, located in numerous airport locations throughout the U.S., Cat Cora’s Taproom located in the Detroit Metro Airport, Ocean by Cat Cora, an award-winning restaurant in Singapore, Kouzzina by Cat Cora at Disney World, CCQ at Macy’s, Postino in San Francisco’s East Bay, Mesa Burger which can be found in Santa Barbara, Goleta and Montecito, and Olilo by Cat Cora and Wicked Eats by Cat Cora have over 500 pop-ups across the country.

In 2018, Cat partnered with WW on a first-of-its-kind health food destination inside Barclays Center in Brooklyn, called WW FreestyleTM Café: BKLYN. That same year, Cat was also proud to be featured in the permanent collection of the Mississippi Arts + Entertainment Museum’s Kitchen Table exhibit in Meridian, Mississippi.

Cat is Little Kitchen Academy’s Official Ambassador, Honorary Head of Recipe Development, and Advisory Board Member. Little Kitchen Academy is the key ingredient for an independent child. The first-of-its-kind Montessori-inspired cooking academy for kids ages three through teen, Little Kitchen Academy is focused on providing a safe, inspiring, and empowering space for children to identify, develop, and refine their senses. Through joy, mindfulness, and learning we are creating a foundation for a healthy lifespan through responsible eating choices: from scratch to consumption.

As if that wasn’t enough, Cora is also a prominent published author of three successful cookbooks, one children’s book and, in 2015, her raw and remarkably candid memoir called Cooking as Fast as I Can: A Chef’s Story of Food, Family and Forgiveness.

Outside the kitchen, Cora is best known for her philanthropic efforts. She is the President and Founder of Chefs for Humanity, a non-profit dedicated to reducing hunger worldwide by supporting humanitarian relief and promoting nutrition education.

In 2018, Chef Cat Cora launched her Women’s Empowerment Culinary Internship Program to mentor, give back and help women succeed in the culinary arts. Each year, Chef Cora and family will host a female student in culinary school for a week in Santa Barbara, CA. The candidate will be given the opportunity to have hands on experience in both the back and front of the house at Chef Cora’s restaurant, Mesa Burger. Additionally, they will experience the daily operations of Cat’s business in its entirety.

President Barack Obama awarded her The President’s Volunteer Service Award for helping to address the most pressing needs in her community and our country and The President’s Lifetime Achievement Award for building a stronger nation through her volunteer service.

Cora currently resides in California with her wife Nicole and their six boys.